This week marked a watershed moment in health policy, so significant that former President Barack Obama returned to celebrate the announcement. Yes, this week the Biden Administration issued a notice of proposed rulemaking directing the Internal Revenue Service (IRS) to revise its 9-year-old interpretation of the Affordable Care Act’s (ACA) employer insurance affordability test, such that about 200,000 uninsured Americans might gain insurance coverage. Impressive, right?

The ACA mandates that employers offer affordable insurance to their employees or face penalties, and sets a threshold for affordability of, at the time, 9.5 percent of the employee’s household income. If the employer-sponsored insurance (ESI) offer exceeds the affordability threshold, the employee is eligible for ACA subsidies and the employer faces additional penalties. The “family glitch,” as it has become known, occurs when an employee receives affordable coverage, but the cost of family coverage exceeds the threshold. Back in 2013, the Obama Administration interpreted the ACA text to say that coverage only must be affordable for the employee. In other words, family members aren’t eligible for ACA subsidies even if the ESI cost for the family exceeds the threshold. There are competing claims over whether Congress intended for family coverage to be included in the affordability calculation—and the ambiguity certainly helped the bill’s Congressional Budget Office (CBO) score. And interestingly, under the new interpretation, if an employee’s family members receive subsidies, it won’t trigger employer penalties, because the penalties are still tied only to whether the employee has an affordable offer of coverage.

That’s the background, but a few additional things should be highlighted. First, as AAF President Douglas Holtz-Eakin noted earlier this week, if the original IRS ruling was clearly wrong, why did the Obama Administration sign off on it in the first place?Further, once the scope of the problem became clear, why didn’t President Obama direct that it be altered during the additional three years he was in office?

There are two possible answers (and both could be true): Either this rule change really isn’t the momentous action it’s being portrayed as, or the Obama Administration didn’t believe this new interpretation to be legal. The evidence for the latter is clear, as it’s taken nearly a decade to reverse course when this “solution” was always available and easy to execute. As to the former, according to the Kaiser Family Foundation, about 5.1 million people fall into the family glitch, but only 9 percent of that population is uninsured. So, fully 91 percent of those impacted are managing to afford insurance one way or another. The administration estimates that of the 451,000 who are uninsured, only 200,000 will enroll in ACA coverage because of the change, while another 1 million people will migrate to ACA coverage from ESI.

There are budgetary implications for all of this, although the White House has glossed over them. Covering more people through subsidized ACA coverage means more federal spending subsidies. There are some offsetting savings due to higher tax revenue from lower pre-tax spending on ESI, but it’s not likely to be the wash the administration would like to suggest. Back in 2020, CBO estimated that this regulatory change would cost roughly $48 billion over 10 years, and increase ACA enrollment by about 1 million.

To be clear, the family glitch isn’t good policy, but whether it came about through drafting errors, intentional budgetary gamesmanship, or flawed interpretation, the Biden Administration’s fix is both legally questionable and hardly the homerun for insurance expansion it’s being touted as.

To track the progress in vaccinations, the Weekly Checkup will compile the most relevant statistics for the week, with the seven-day period ending on the Wednesday of each week. 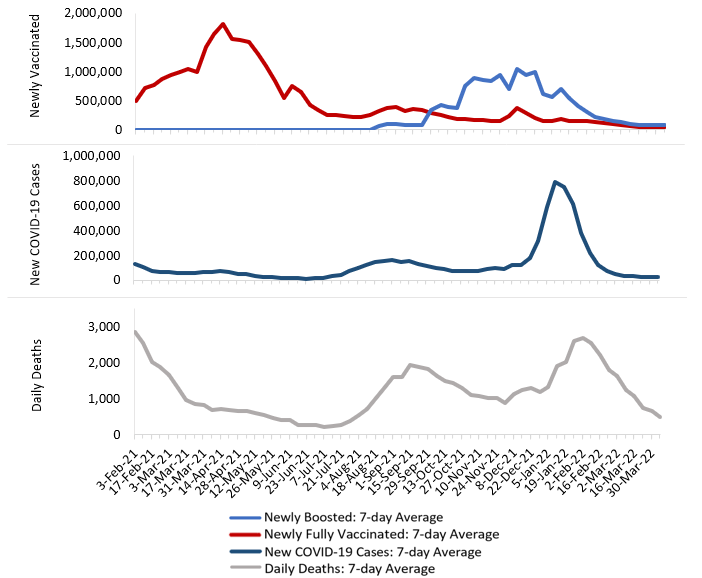